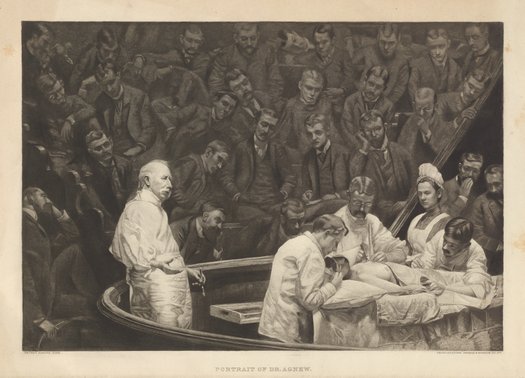 This photogravure by Gebbie & Husson Co. Ltd. reproduces Thomas Eakins' painting known as The Agnew Clinic (or The Clinic of Dr. Agnew). Eakins was commissioned by the University of Pennsylvania Medical Class of 1889 to paint a portrait of Dr. David Hayes Agnew (1818-1892), who was retiring as professor that year. Dr. Agnew is depicted lecturing during a partial mastectomy before an audience of medical students, being assisted by Penn professors Dr. J. William White (1850-1916) and Dr. Joseph Leidy (the nephew of famed professor Joseph Leidy) and by Hospital of the University of Pennsylvania physician Dr. Ellwood R. Kirby. The work also includes nurse Mary Clymer (who was an 1889 graduate of the Hospital of the University of Pennsylvania), and behind her on the far right, another HUP physician, Frederick H. Milliken, is in conversation with Eakins himself.

This painting depicts Joseph Lister’s discoveries that had led to the promotion of antiseptic surgery by Agnew and others, which contributed to Eakins’ depiction of Agnew and his team of doctors as wearing clean white gowns, using sterilized instruments in a covered case, and benefiting from the services of a nurse.

Eakins’ original painting is in the collection of the University of Pennsylvania.