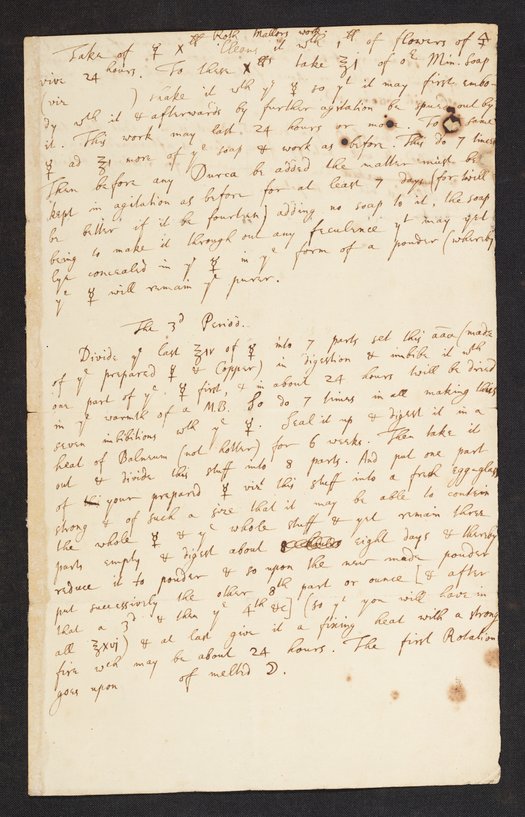 Written in Isaac Newton's hand, Roth Mallor’s Work consists of extracts from the work of Erasmus Rothmaler, a German alchemist about whom essentially nothing is known. Text found on verso is two unrelated chemical recipes for "a menstruum that will disolve gold" and "a menstruum for resolving bodies like the Alkahest but not so potent."

This manuscript sheds light on a story involving three prominent thinkers of late-17th-century England: Isaac Newton (1643-1727), John Locke (1632-1704), and Robert Boyle (1627-1691). After Boyle's death, Newton, with the help of Locke, pursued Boyle's collection of alchemical processes to uncover the secret of metallic transmutation. This manuscript, written by Newton, contains the first and third period of the transmutation process drawn from a manuscript tract sent to Boyle by Erasmus Rothmaler. It serves to prove Newton's and Locke's interest in alchemical transmutation and their collaboration. A diary entry of Locke's dated May 10, 1692 contains the third-period recipe verbatim, except in Latin rather than English, along with the recipe found on the verso of the manuscript.

Then before any Durca be added the matter must be
kept in agitation as before for at least 7 days (for twill
be better if it be fourteen) adding no soap to it, the soap
being to make it through out any feculence y^[t] may yet
lye concealed in y^[e] ☿ in y^[e] form of a powder (whereby
y^[e] ☿ will remain y^[e] purer.

From Quick lime sublimate * extract y^[e] salt out of the caput
mort. Tis a very fusible ^[fixt] salt. Pour upon it 1/10 of its weight
of spirit of niter or Aqua fortis & you will have a menstruum
w^[ch] will dissolve gold.

℞ butter of ♁ per deliquied. Digest it in a heat like that
of blood. It will putrefy grow black & afterwards clear again
& dissolve metall then be a menstruum for resolving bodies like
y^[e] Alkahest but not so potent. 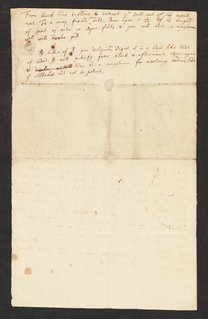