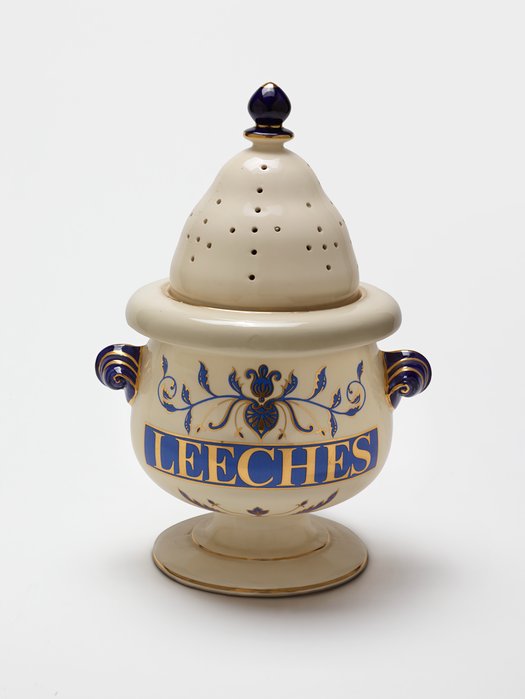 Leeches have been used in medicine since ancient times. During the Victorian era, French physician Francois-Joseph-Victor Broussais sparked a boom in the leech trade with his popular theory that diet, bloodletting, and the application of leeches could treat all disease. It is for this reason that the period was known as the time of “leechmania.”

Bloodletting is a dangerous practice involving the draining of a patient’s blood flow. It was believed that weakening the body through the reduction of blood flow treated a variety of disorders, especially fevers and inflammatory diseases. Medicinal leeches, bloodsucking aquatic worms with unusual mouth structures and special saliva that serves as both an anesthetic and anticoagulant, were used along with such surgical instruments as lancets and fleams to drain blood. This white leech jar with blue and gold details is a modern example based on leech jars from the previous century. The lid has a series of holes that allow for air.

Typically leech jars feature an elaborate presentation, which indicate the high value leeches held as a commodity during this period. They were sold in great numbers to members of both the medical profession and the public. At the height of this fad, elaborately decorated leech jars could be found in apothecary shops as well as in parlors. Traditionally an unsavory job performed by women, children, and even horses, collecting leeches in the wild became difficult as leech populations dwindled. Entrepreneurs established leech farms and designed mechanical substitutes.

Bloodletting, often criticized during its time, quickly fell from favor due to the advent of new, more effective, medical techniques and understandings. Leeches are still occasionally used in modern medicine, although in a much different manner. Today they are primarily used in reattachment surgery, skin grafts and as useful tools in reducing swelling after microsurgery.