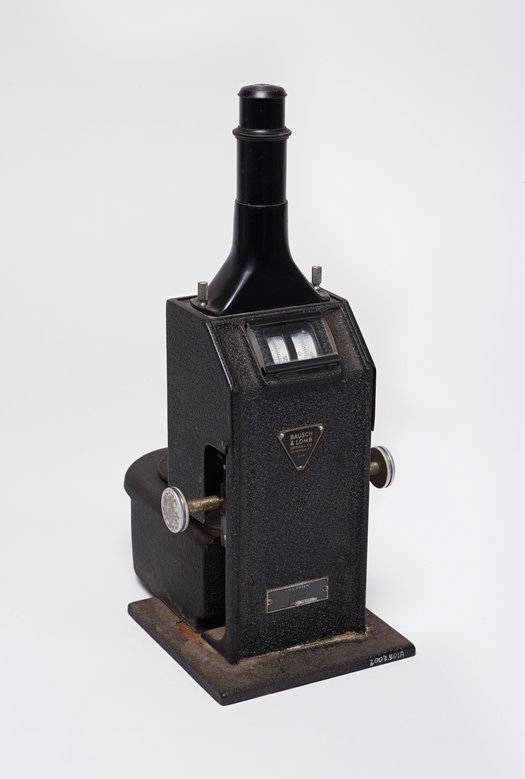 A: Duboscq type colorimeter, biological, with electric illuminator. Hollow black cast iron base attached to a sloping cast iron upright supporting the reader, prisms, and sample cups; reader detaches with two metal screws; upright also supports the sample cups (see B and C) and a mechanism for raising and lowering the sample cups on a focusing rail; two stainless steel knobs at the bottom of the upright control the height of the sample cups; a scale on the front of the upright indicates the height of the sample cups from zero to fifty millimeters, read against a 0-10 vernier scale; base has a circular hole for inserting the electric light bulb (see E) and a screw for holding the bulb in place; a swinging mechanism at the bottom rear of the base controls a metal shield inside the base, which can control the intensity of the bulb's light; two metal tags on the front of the upright identify the manufacturer, patent number, and serial number; an upside down metal tag on the rear of the base identifies a pending patent and serial number.

B: Armored sample cup with a glass bottom, metal collar, and glass-lined interior; stored in place on the colorimeter.

C: Armored sample cup with a glass bottom and metal collar; stored in place on the colorimeter; missing the glass-lined interior.

E: Light bulb on a cast iron, cork, and metal base with an on-off switch, attached to a 34.5" electrical cord, stored in place in the colorimeter. 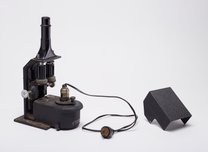