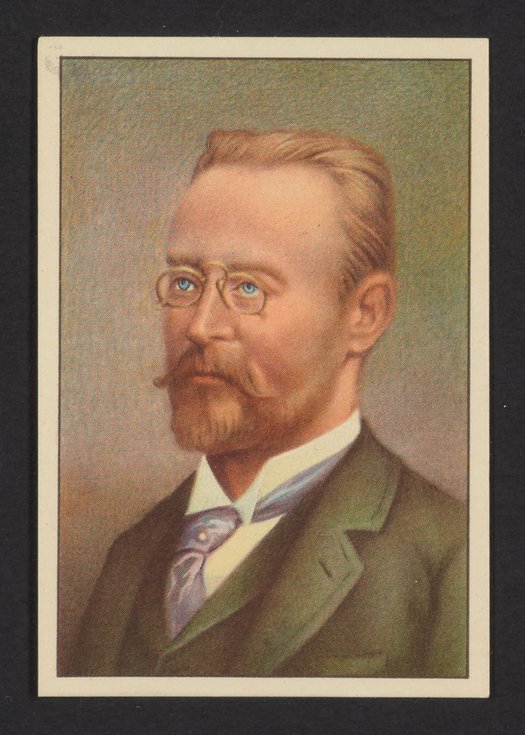 Austrian chemist Carl Auer von Welsbach (1858-1929) was a key figure in the history of rare earth elements. In 1885 he showed didymium was not an element, but an alloy of two elements that he named praseodymium and neodymium. He later separated lutetium from ytterbium. Welsbach developed incandescent gas mantles for interior and street lighting in the late 1880s, the first industrial product to use the rare earth elements. The Welsbach companies gave him a degree of international fame, reflected in his presence on this trading card produced around the time of his death. Trading cards were included in packets of cigarettes and chewing gum during the 1900s. As the inventor of a portable fire lighter that used ferrocerium, his presence on a cigarette trading card is especially apt.

In the 1880s, Austrian chemist Carl Auer von Welsbach (1858-1929) created fabric impregnated with thorium and cerium, which glowed incandescently when heated by burning gas. Mantels for gas lamps were the first industrial product to use rare earth elements, and led to an international trade in rare earth ores, especially monazite. Welsbach managed firms around the world that sold gas lamps for lighting streets, homes and businesses, which shaped the visual landscapes that millions of people inhabited from the 1890s into the 1930s.