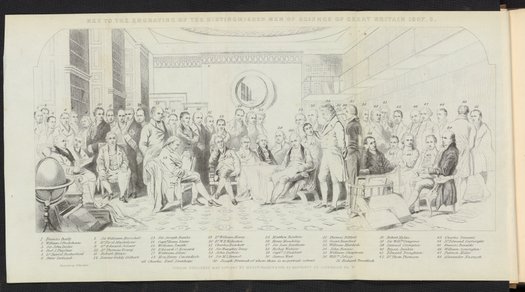 Foldout frontispiece illustration entitled "Key to the Engraving of the Distinguished Men of Science of Great Britain 1807-8" depicts all fifty one scientists whose biographies are included in this work. They are portrayed as gathering in the upper library of the Royal Institution, which the scientists would have frequented during their lives.

The volume this illustration comes from contains fifty one biographies of scientists living in Great Britain during the years 1807-8. Scientists include astronomers, chemists, engineers, naturalists, and other men of science.

Frontispiece: Fifty one male scientists of Great Britain living in the years 1807-8