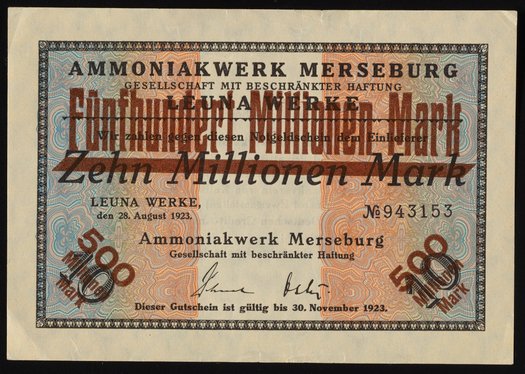 This Zehn Millionen/Fünfhundert Millionen Mark Notgeldschein, or ten million/five hundred million Mark emergency money bill, was issued by Ammoniakwerk Merseburg of Badische Anilin- & Soda-Fabrik. Fünfhundert Millionen was printed over the original Zehn Millionen Mark voucher due to rampant hyperinflation. The verso of the company scrip includes the terms of the scrip. This particular voucher was issued by the Ammoniakwerk Merseburg Leuna-werk, or the ammonia works of Merseburg. Paper features a watermark design.