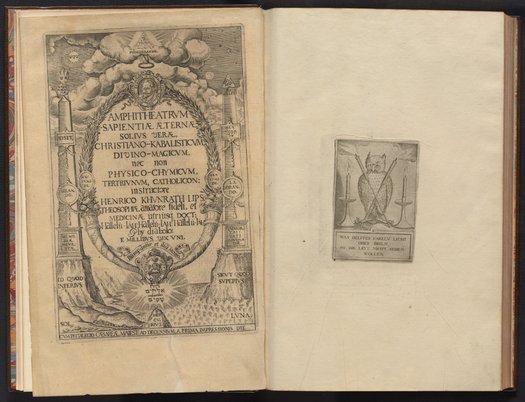 The title page and frontispiece of Khunrath Heinrich's (1560-1605) Amphitheatrum Sapientiae, purportedly one of the most significant books of theosophical alchemy and the occult sciences. Though the title page reads 1602, the book was not published until 1609. Erasmus Wohlfahrt edited and published the manuscript following Heinrich's death in 1605 after adding a preface and conclusion. The work contains masterful engravings, remarkable for their execution as well as alchemical symbolism. Nine double-paged copperplate engravings along with the title page and frontispiece can be found in the digital collections.

The frontispiece at right depicts a bespeckled owl crossed in front by two torches and flanked by two candles. Beneath the owl is a German caption translating to: "What good can torches or light or spectacles do if the people don’t want to see." The owl is found extensively in alchemical texts, especially Heinrich's, symbolizing wisdom, prudence, study, or reflection. The owl could also be considered an evil omen, foretelling death.

The title page at the left is exquisitely detailed and embellished with religious references. God is represented by a Tetragrammaton at the top of the page. From the clouds descends a hand, labeled "Omnia", or "all things," lowering a crown of greenery onto the portrait of the author. The title is framed by lush cornucopias and obelisks on either side. Below the title is a coastal landscape, from which the obelisks emerge.