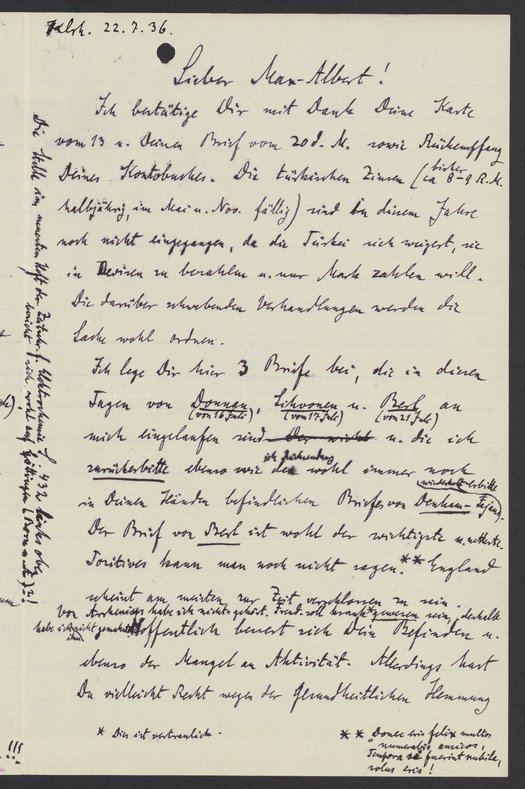 Georg Bredig (1868-1944) informs his son, Max Bredig (1902-1977), that he is sending him various correspondence from his colleagues. He additionally mentions financial matters and advises his son to remain steadfast as he contemplates emigration from Germany under the Third Reich. Georg's inclusion of a Latin quote from the Roman poet Ovid's Tristia, "Donec eris felix, multos numerabis amicos: tempora si fuerint nubila, solus eris" (As long as you are happy, you will have many friends; if your life becomes clouded, you will be alone), poignantly reflects this advice.

With thanks, I confirm receiving your postcard from July 13th, your letter from July 20th, and your account book. The Turkish interest (now up to approximately 8-9 Reichsmarks every six months and due in May and November) has not yet been received this year because Turkey refuses to pay it in foreign currency and only wants to pay marks. The planned negotiations will probably sort things out.

I am enclosing three letters that I received recently from Donnan (on July 16th), Sihvonen (on July 17th ) and Berl (from July 21st). Please return them, as well as the letter from Denham-Fajans that you still have. The letter from Berl is likely the most important and nicest, but nothing is certain just yet.** England seems to be closed to most people at the moment.

I haven’t heard anything yet from Arrhenius. Freud. was supposedly ill, which is why I didn’t mention him. Hopefully, your state of health improves, as well as your lack of activity. Nonetheless, you are perhaps right about your health obstacles

** As long as you are happy, you will have many friends; if your life becomes clouded, you will be alone.

The position in the latest issue of the Journal for Electrochemistry on pg. 432, top left, probably refers to Göttingen (-----).

and the climate. After all, if you choose the right place, it’s not that bad. Who can know who acts better, who goes abroad, or who stays? Have you also considered what can happen in the event of war?

I am enclosing the copy of my letter to Nord and request that you return it. Judge for yourself what was wrong with it. Emphasize that you didn’t know anything about my letter and didn’t initiate it either. I am also enclosing a copy of letter to Berl dated July 19th (and request that it be returned). When Berl sent his letter on July 21st, I don’t know if he already had my letter from July 19th. I think it is possible.

We probably won’t depart before the end of the month. When we stop in Milan, we want to visit mother’s relatives (Sigmund Rosenbaum and his wife – (from the Fraenkel family), Via Appiani 2. Telephone: 67669. Remember this address just in case).

Warm regards to you from me, Marianne, Mrs. Cotiaux, and Mrs. Marx.

Aunt Ida’ will have her 60th birthday on Saturday, July 25th. Don’t forget to congratulate her.

*Perhaps N. found out about my well-intentioned comment regarding J.G. Stern’s publication or was annoyed by the patronizing final paragraph in my letter. 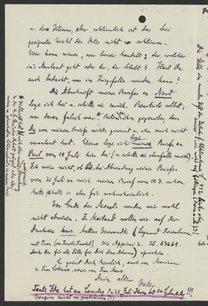