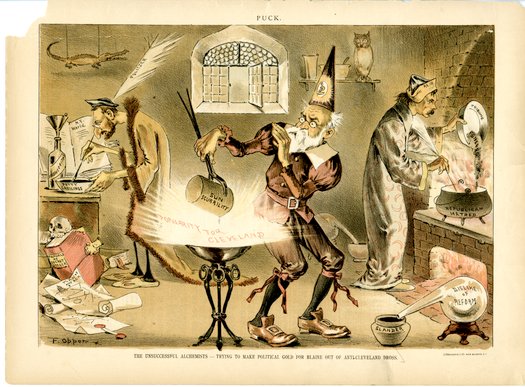 This illustration by F.B. Opper appeared in the November 2, 1887 edition of Puck, an American literary humor magazine. The image shows three bearded alchemists in fantastic dress, working with crucibles, alembics, and other traditional alchemical tools. The satire is directed at scandal-burdened Republican James G. Blaine. Blaine had lost the 1884 presidential election to Democrat Grover Cleveland, who campaigned on civil-service reform. With an eye on the 1888 presidential race, the weekly magazine mocks three newspapermen loyal to the Republican Party as "Unsuccessful Alchemists." Here the editors of the New York Tribune, World, and Sun are shown attempting to make "gold" for Blaine out of poor materials: slander, "dislike of reform," sneers, and insincerity.