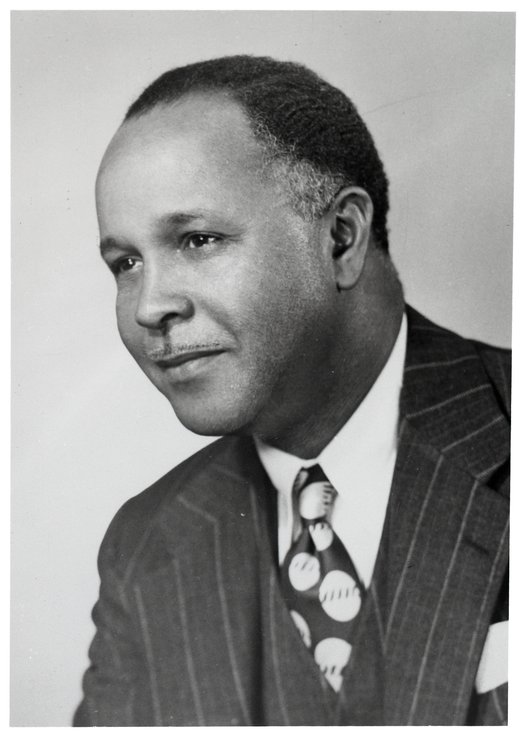 Portrait of Percy Lavon Julian (1899-1975), African American research chemist and pioneer in the chemical synthesis of medicinal drugs from plants.

Percy Lavon Julian was born in Montgomery, Alabama on April 11, 1899 and received his B.S., majoring in chemistry, from DePauw University in 1920. In 1923, Julian received an Austin Fellowship to attend Harvard University, where he completed a master’s degree in organic chemistry. Following graduation, Julian taught chemistry at West Virginia State College and Howard University before receiving a Rockefeller Foundation fellowship to continue his graduate studies at the University of Vienna in 1929. Studying under Austrian chemist Ernst Späth (1886-1946), Julian focused his doctoral studies on the chemistry of medicinal plants and earned his PhD in 1931.

In 1932, Julian returned to DePauw to teach organic chemistry and, in collaboration with Dr. Josef Pikl, successfully completed the first total synthesis of physostigmine, a drug which was used as a treatment for glaucoma, in 1935. Julian subsequently assumed the position of chief chemist and Director of the Soya Product Division at the Glidden Company, where he worked on the isolation of soy proteins and the synthesis of progesterone, estrogen, and testosterone from the plant sterols stigmasterol and sitosterol, among other projects. Julian remained at Glidden until 1954, when he founded his own company, Julian Laboratories, which notably focused on the synthesis of steroid intermediates from the wild Mexican yam. Over the course of his career, Julian received more than 130 chemical patents and in 1973, became the second African American, following David Blackwell, to be elected to the National Academy of Sciences. Percy Lavon Julian died in Waukegan, Illinois on December 19, 1975.