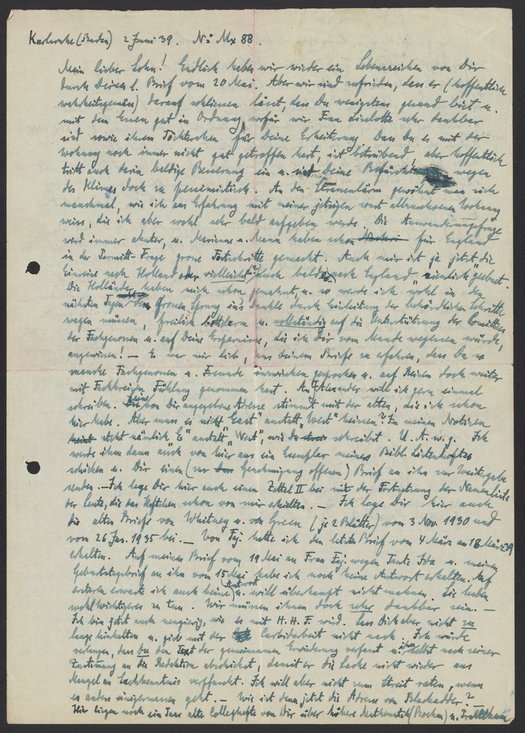 Your nice letter from May 20th finally gave us a sign of life from you. Nonetheless, we are satisfied that it suggests (hopefully truthfully) that you are at least healthy and that your food is fine. We are grateful to Liselotte and her little daughter for your cheerfulness. It’s sad that you still haven’t adjusted to your apartment, but hopefully things will improve soon. Your fears about the climate are too pessimistic. Sometimes you get used to the street noise, as I know from experience with my current apartment. It is otherwise very nice, but I will probably give it up pretty soon. The question of emigration is becoming increasingly dire, and Marianne and her husband have already made a lot of progress regarding England and their entry permit. My ability to travel soon to Holland or possibly England has “pretty much” eased up. The Dutch have already warned me. Hence, in the next few days I will probably have to take a big leap into the dark by applying. Admittedly, I will be bitterly poor and completely dependent on the support of my colleagues’ committees and your savings, which I will use up. It was nice to learn from your letter that you spoke to so many colleagues and friends and continued to touch base with specialist circles during your travels. I would like to write to J. Alexander sometime. The address you gave me matches the old one that I already have here. However, doesn't it have to be “East” instead of “West”? In my notes, it says “E” instead of “West,” as you write. I will also send him a copy of my bibliographic booklet from here and send you a letter to forward to him. I am also enclosing note II with the continuation of the list of names of the people who have already received the booklet from me. I am also enclosing the old letters from Whitney and Green (2 sheets each) dated November 3, 1930, and January 26, 1935. Fajans’ last letters to me were from March 4th and March 18th, 1939. I have not yet received an answer to my letter from May 19th to Mrs. Fajans regarding Aunt Ida or my birthday letter to him from May 15th. I don’t expect an answer to the first one and I don’t want to send a reminder at all. They probably have more important things to do. We must be very grateful to them. I’m also curious now how things with H.H.F. will turn out. Don't let yourself be held up for too long and don’t concede the carbide publication. I would demand that you write the text of the joint reply and send it to the editor yourself after his approval, so that he does not botch it up again due to lacking expertise. Yet I don't want to suggest starting a dispute if there is another solution. What is Blackadder's address now? Enclosed are a few of your college notebooks on higher mathematics (Bochm)

work on qualitative analysis. Can I throw them away or should I send them to you as “business documents”? You may be interested that I.G., according to a patent and the Frakfurter Zeitung, is making acetylene for “Buna” synthesis with the electric arc from deciduous hydrocarbons and not from CaO and C. Forty years ago, I already obtained acetylene from petroleum with the electric arc (Journal of Electrochemistry 4, page 514 (1898)). Aunt Vally is with me at the moment. She is not doing very well in Koe. She is completely lonely, Anndel and Fraenzel do not care for her enough, and she will probably lose her apartment there soon. I hesitate to leave her alone at the age of 68 if she still has time left to live.

Her brother-in-law is also emigrating. She has no one for affidavits and financial maintenance abroad. Aunt Ida is also coming here this evening for a few days to say goodbye. In Berlin, they are still perplexed about possibly emigrating. My friend in Utrecht, Holland, was rightly celebrated when he retired. He was also presented with a plaque. I sent a telegram for the big celebration at the university. Donnan was very kind to give me his reference for the English “Society for the Protection of Science and Learning.” More on this later. What should happen with our ancestral pictures, especially the pictures of your great-great-great-grandparents Bach, your great-grandmother Marianna Hollstein, your great-uncle, the bookseller Hollstein, and the picture of your grandmother Ernestine etc.? Stay healthy and be optimistic. Send my regards to all friends and colleagues, who are of good will. Write often. Hello from Marianne, Viktor, Aunt Vally and Ida, Mrs. Cotiaux, and others.

Lis N. left for England a few days ago to work as a maid. The 3 boys from Eastbourne write us cheerful letters. Understandably, Marianne is terribly exhausted from moving. 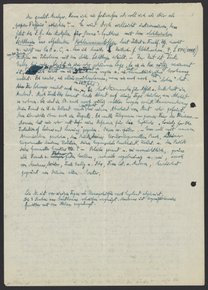