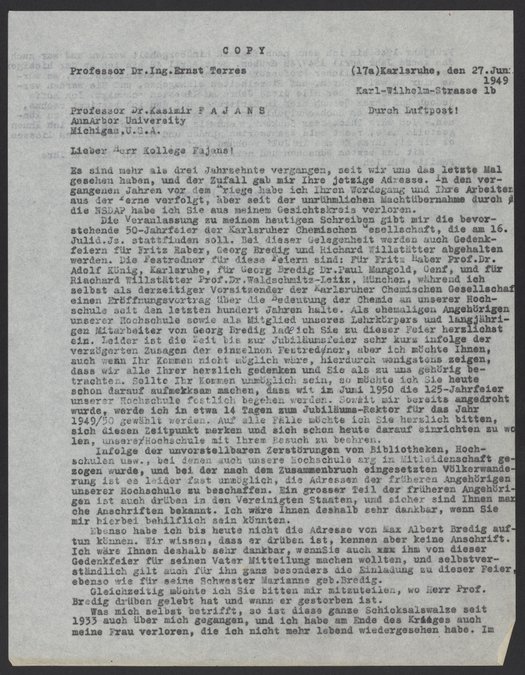 It has been more than three decades since we last saw each other and by chance, I obtained your current address. In the years before the war, I followed your career and your work from afar, but since the NSDAP's inglorious seizure of power, you have disappeared from my line of sight.

The reason for my letter today is the forthcoming 50th anniversary celebration of the Karlsruhe Chemical Society, which shall take place on July 16th of this year. Commemorations for Fritz Haber, Georg Bredig, and Richard Willstätter will also be held on this occasion. The keynote speakers for these celebrations are Professor Dr. Adolf König for Fritz Haber, Dr. Paul Mangold, Geneva, for Georg Bredig, and Professor Dr. Waldschmitz-Leitz, Munich, for Richard Willstätter. As the current chairman of the Karlsruhe Chemical Society, I will personally deliver opening remarks on the importance of chemistry at our university over the last century. As a former faculty member of university and longtime colleague of Georg Bredig, I cordially invite you to this celebration. Unfortunately, the time span until the anniversary celebration is very brief due to the delayed confirmations of the individual speakers. However, I would like to show you, even if it you could not attend, that we are all thinking of you warmly and consider you a part of us. Should it be impossible for you to come, I would like to draw your attention to the fact that we will celebrate the 125th anniversary of our university in June 1950. As far as I know, I will be elected Jubilee Rector for 1949/50 in about two weeks. In any case, I would request that you take note of this date and make plans to honor our university with your visit.

As a result of the unimaginable destruction of libraries, universities, etc., which also affected our university tremendously, and the mass exodus that occurred after the regime’s collapse, it is unfortunately almost impossible to obtain the addresses of the former faculty members of our university. Many former colleagues are also over in the United States, and I'm sure you know some of the addresses. I would therefore be very grateful if you could help me with this.

To this day, I have likewise been unable to find the address of Max Albert Bredig. We know he's over there, but we don't know his address. I would therefore be very grateful if you would also inform him of this memorial service for his father. Of course, he and his sister, Marianne, née Bredig, are especially invited to this celebration.

At the same time, I would like to ask you to tell me where Professor Bredig lived over there and when he died.

As far as I am concerned, I have also been affected by this tragedy. At the end of the war, I also lost my wife, whom I never saw alive again.

In the spring of 1946, I went to England and was there for an entire year from April 1947 to April 1948. Since April 1948, I have been a tenured professor of coal and petroleum chemistry at the local university. It would take far too long to go into detail here, and you will understand that I prefer to remain silent about all these years. However, I hope I can tell you more in person during your visit here in Karlsruhe, which I am counting on for the university’s anniversary. I would be very grateful if you would answer my questions promptly and let me know soon if you can attend in July.

Best wishes and warm regards to you and your family. 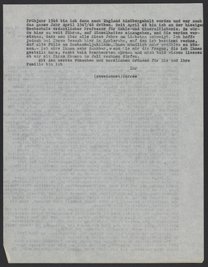 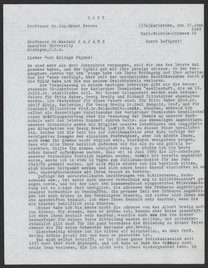 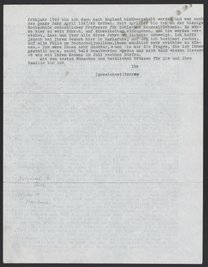