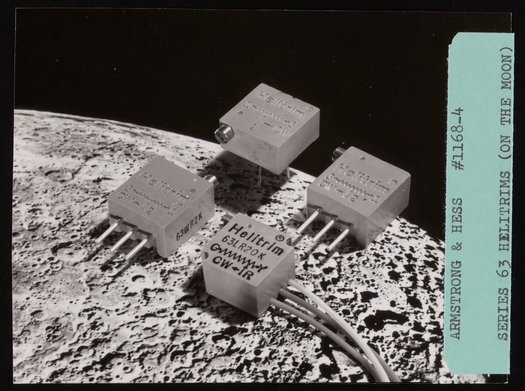 This photograph depicts Helitrim trimming potentiometers displayed on a moon-like surface and is part of a series of marketing images designed to emphasize the small size of the potentiometers. The text on the label identifies the product as Series 63 Helitrim potentiometers and the photographer, "A & H," as Armstrong and Hess.

Potentiometers regulate the flow of electricity, like the volume dial on a radio. In 1940, Arnold O. Beckman was unsatisfied with dials on the market, so he designed his own helical potentiometers, or helipots, for use in his popular pH meter. The precision of this dial caught the eye of the MIT Radiation Laboratory’s secret radar project during World War II. Beckman redesigned the helipot to meet the needs of the United States military and set up a separate company, also called Helipot, to keep up with the demand for these knobs. In the 1950s, Helipot was reincorporated into Beckman Instruments as the Helipot Division and continued to make potentiometers and other electrical components for decades, those tiny dials becoming staples of the electronics manufacturing industry..

Helitrim trimming potentiometers on the moon