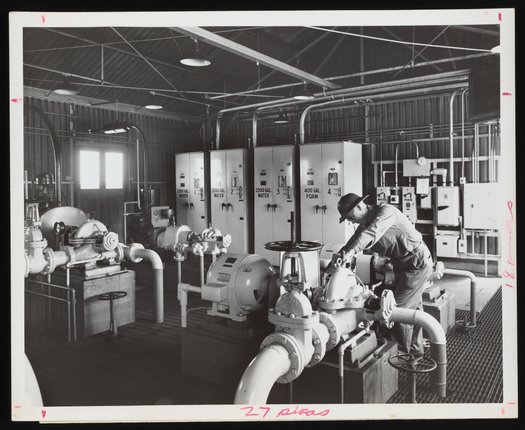 General view of safety inspector John Cloer at work in the foam house at the Hercules Powder Company plant in Brunswick, Georgia, with view of assorted fire-fighting and fire-suppression apparatus. One of two Hercules plants specializing in naval stores, the Brunswick plant extracted rosin, turpentine, and pine oil from pine tree stumps in order to produce a range of chemicals used in the manufacture of varnishes, paints, adhesives, insecticides, textiles, and other industrial products. Per notations accompanying the photograph, the plant boasted an elaborate and highly-developed automatic fire-fighting system as protection against the highly inflammable materials manufactured at the facility.