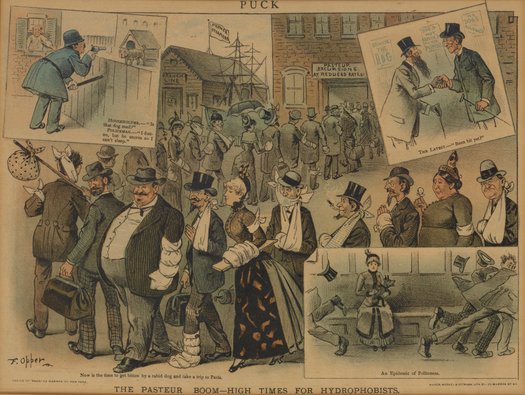 Featured on the back cover of Puck magazine, this cartoon entitled "The Pasteur Boom—High Times for Hydrophobists" mocks those who traveled to France to receive Louis Pasteur's (1822-1895) new vaccine for the rabies virus. The illustration depicts incapacitated crowds wearing bandages and slings lining up for "Pasteur excursions at reduced rates" with a ship docked next to signs reading "French steamers" and "French line." Left inset illustration depicts a police officer aiming a gun at a dog with the upper right illustration showing two men meeting with the caption "Been hit yet?" The lower right inset shows a woman holding a dog with people fleeing past her. The caption reads "an epidemic of politeness."

In 1885, a dog tore through a crowded street in Newark, New Jersey, attacking six young children. Fearing the worst, the children’s physician, Dr. William O’Gorman, sent a telegram to Louis Pasteur who replied, “send the children immediately.” Six months earlier, Pasteur had successfully administered a rabies inoculation to another child bitten by a rabid dog. Although he did not know the agent that caused rabies (a virus), Pasteur developed a process for transmitting and attenuating the disease in the spinal cords of rabbits. Four of the children traveled to Paris for treatment. Daily media coverage and satire helped spread excitement and faith in the promise of a new era of scientific cures.