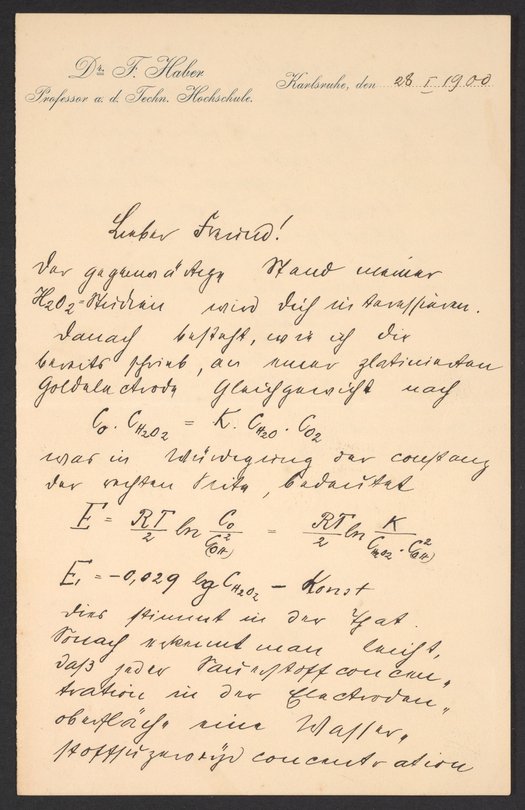 Fritz Haber (1868-1934), a German chemist and 1918 winner of the Nobel Prize for Chemistry, updates his colleague, Georg Bredig (1868-1944), on the current status of his chloride chemistry research, including an extensive discussion of Haber's recent experiments in the field. Haber inquires if Bredig knows how a "Melville" was able to transform potassium hypochlorite (KClO) into potassium chlorate (KClO3). Haber is attempting to understand "Foerster's" chlorate research and describes his issues with it to Bredig in depth.

The current status of my H2O2 studies will interest you. As I already wrote to you, balance subsequently persists on a platinized gold electrode

which, when considering the right side, means

which is in equilibrium with it and whose magnitude is immediately apparent from the formula. The following must now be observed:

The four compounds CO, CH2O2, CH2O, CO2 are not only linked by the given relationship, but the connection between CO and CO2 still exists

The speed of this process is small compared to that of the other process:

Hence, we concurrently have catalysis and equilibrium, or in other words, we can observe dynamic reactions, but are always very close to equilibrium.

With this in mind, I would like to ask you to kindly inform me as soon as possible of how Melville made this substance with the transformation of KClO into KClO3. Of course, I will treat any information you provide, if I use it at all, as Melville’s intellectual property.

I’m finally dealing with Foerster's work on chlorate. A lot of things are really strange. The following interpretation that he gave

is very odd because it is claimed here that the concentration of chlorine ions increases in the event of an alleged “oxidation of the chlorine ions” by hypochlorous acid.

Of course, it should then lower again.

Yet however one formulates the speed of the first process, it would have to be inhibited with increasing chlorine ion concentrations. In the simplest case

where C[Cl], the cliocene concentration, stands out on the left. It would therefore only remain to test the first reaction as an infinitely fast equilibrium development and to link the observed process to the second equation

The equilibrium β) has now been measured. For chlorine gas at atmospheric pressure, it would be:

However, this is the equation for the reaction:

Now we know that β) is one of the reactions that reach equilibrium as quickly as possible. Moreover, there would be instantaneous turnover for both α and β), while Foerster's observations yield slow ones. There are still many similar things.

However, I want to first hear what you have already found before I do this experiment. 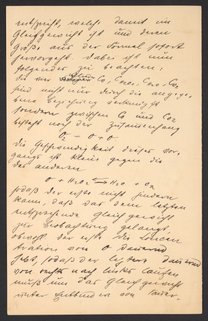 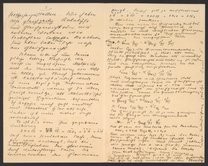