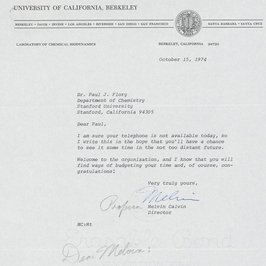 The Paul J. Flory papers afford the scholar a unique glimpse into the working life of an American chemist who was equally at home in the academic and the industrial sectors. Professor Flory carefully maintained his records over the years, so it is possible to trace his career as an industrial chemist, as a working academic, as a semi-retired lecturer, and as a worker in the field of human rights.

This is an extraordinarily rich collection related to the career of a Nobel Prize-winning chemist, acclaimed for his work in the field of polymers/macromolecules. It includes Flory's working notes and theoretical musings, as well as his drafts and manuscripts for most of his major writings, including his Nobel acceptance speech, both of his published textbooks (Principles of Polymer Chemistry and Statistical Mechanics of Chain Molecules), and several chapters to a never-completed book on rubber elasticity. The collection spans 38 linear feet, but only a small portion of it has been digitized.

Search within the Papers of Paul J. Flory