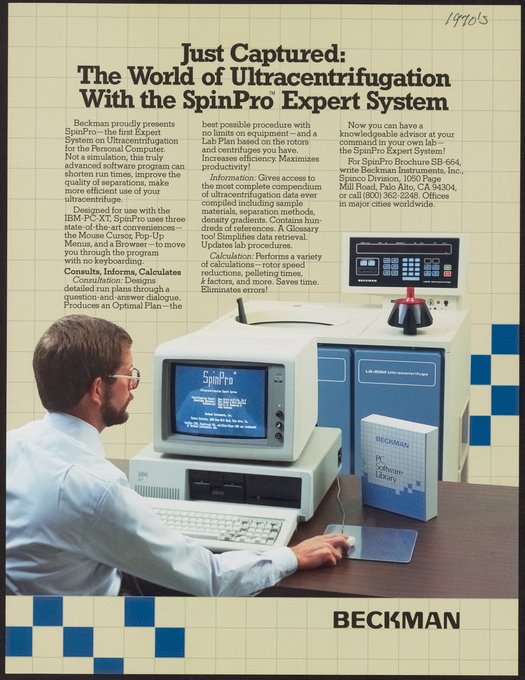 The SpinPro Expert system software designed ultracentrifuge procedures based on users' answers to a series of questions, intentionally mirroring the telephone conversations that users used to have with Beckman Instruments' staff. This system contained data on many different ultracentrifuge models and systems, so the procedure it suggested could be tailored to the specific instruments a user had available in her laboratory. The date handwritten on the advertisement is likely a mistake, as this software was first marketed in 1985.

Beckman Instruments, Inc. began producing centrifuges after their January 1, 1955 acquisition of industry leader, Specialized Instruments Corporation, or Spinco. With Spinco came the famous Model E Ultracentrifuge, which was developed in 1947 and was used for many important scientific discoveries of the 20th century, like the 1957 CalTech experiment that proved James Watson and Francis Crick’s theory on DNA replication. Centrifuges continue to produced under the Beckman name as of 2016.

Just Captured: The World of Ultracentrifugation With the SpinPro Expert System