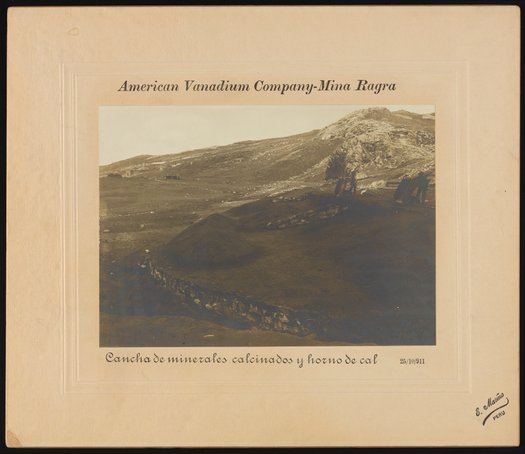 General view of a field of calcined minerals and lime kiln at the American Vanadium Company (later the Vanadium Corporation of America) mining camp located at Mina Ragra in the Peruvian Andes. Vanadium, a malleable transition metal, was discovered in its natural state in Mexico by Spanish-Mexican scientist, engineer, and naturalist Andrés Manuel del Río (1764-1849) in 1801, though it was not isolated and recognized as an element until 1830. Following the discovery of a large deposit of vanadium in the Peruvian Andes in 1905, vanadium became commercially viable and significantly impacted the steel industry. In 1906, the American Vanadium Company was organized to mine the new deposit, known as Mina Ragra, and use of vanadium to produce specialty steel alloys quickly became widespread, particularly in the burgeoning automobile industry.