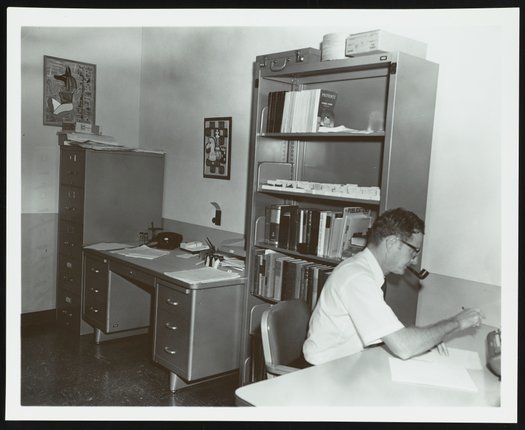 Henry Earle Lumpkin in his office at the Exxon Research and Engineering Company laboratory in Baytown, Texas. Lumpkin is seated at his desk using an Friden electromechanical desktop calculator. Lumpkin's collection of fossils, as well as his personal technical library, are visible on the bookcase behind him.

Henry Earle Lumpkin (1920-2012) was born in Ingram, Texas in 1920 and received his B.A. in chemistry from Southwest Texas State University in 1941. He subsequently undertook graduate work in meteorology at the University of California and served as a Base Weather Office in the U.S. Air Corps during World War II. Following the war, Lumpkin joined the Humble Oil & Refining Company as a research chemist working in the Baytown, Texas laboratory. After the Standard Oil Company acquired Humble in the 1960s, Lumpkin worked as a research specialist in what became known as the Esso Production Research Company. Lumpkin was a prominent member of both the American Society for Mass Spectrometry and the American Society for Testing and Materials and published several journal articles on the topic of mass spectrometry. Henry Earle Lumpkin died on July 5, 2012 in Round Rock, Texas.