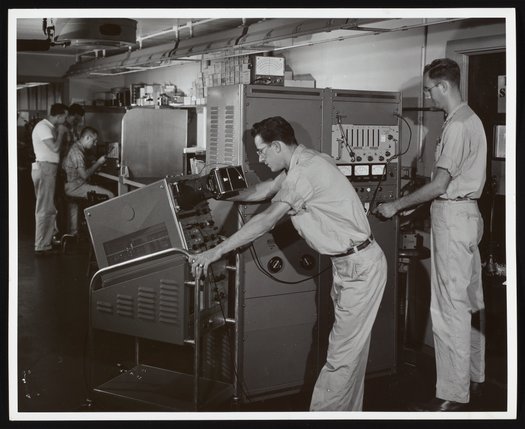 General view of employees Thomas Stauble (left, foreground) and Andrew Tubby (right, foreground) using assorted machinery to test the destructive range and effectiveness of detonators and initiators manufactured at the Hercules Powder Company plant located in Port Ewen, New York. Per notations on the verso of the photograph, Tubby is using a Beckman (Berkeley) Time Interval Meter to apply the correct firing load to a test device located behind the wall, while Stauble photographs the effects of the detonation. The three employees visible in the background are identified as follows (left to right): Henry Meigel; James Ellsworth, Jr.; and Edwin Smedes.