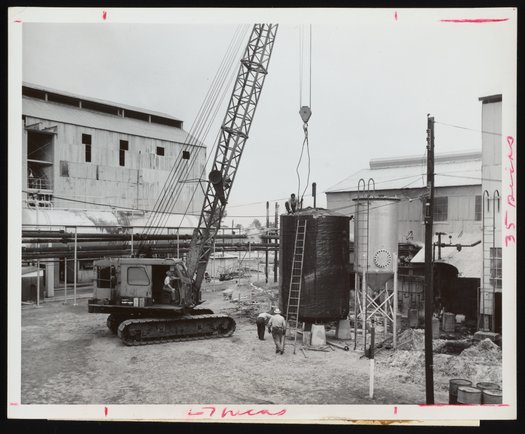 General view of several employees using a crane to move a heat treatment tank in preparation for the expansion of rosin-making facilities at the Hercules Powder Company plant in Brunswick, Georgia. One of two Hercules plants specializing in naval stores, the Brunswick plant extracted rosin, turpentine, and pine oil from pine tree stumps in order to produce a range of chemicals used in the manufacture of varnishes, paints, adhesives, insecticides, textiles, and other industrial products. The employees visible in the photograph are identified as follows: rigger Sidney Dent (beside tank); rigger Robert Ernest Wilchor (bottom of ladder); rigger Edward Gale (on top of tank); and crane operator Houston Hall.