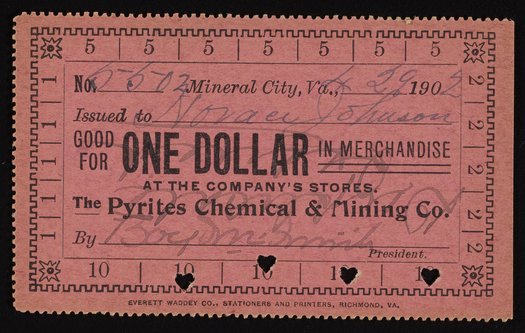 Company scrip or chit issued by the Pyrites Chemical & Mining Company in the amount of one dollar in merchandise redeemable at the Company's stores. Edge of chit is printed with numbers that add up to the value of the chit. This particular chit has forty cents punched as being spent.

The Pyrites Chemical & Mining Company, also known as the Boyd Smith Pyrites Mines, was owned by the E.I. du Pont de Nemours & Company. They shipped products including lumps and fines, with the fines containing sulfur used to produce sulfuric acid.