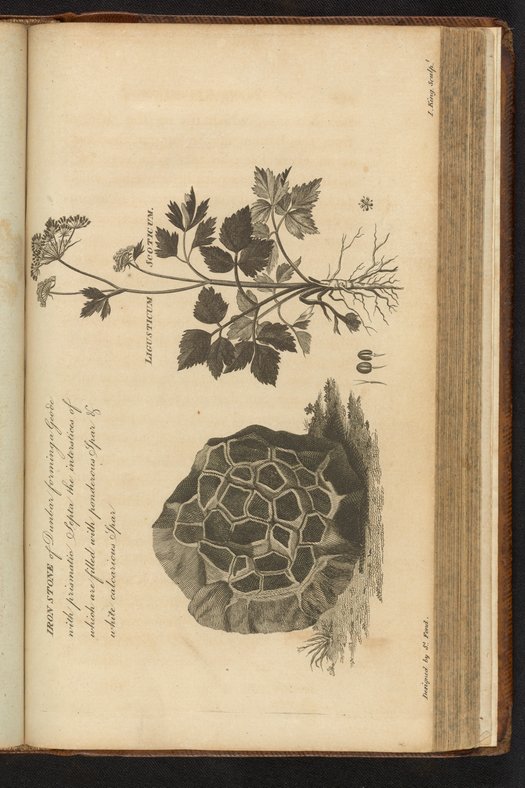 This plate is of two botanical samples found by Faujas de-St.-Fond (1741-1819) during his travels. On page 190 de-St.-Fond says of the Iron ore pictures, "This species of iron is obtained in great abundance from a hill near Dunbar, a small town in Haingtonshire, about thirty-five miles from Edinburgh, close by the sea, and consequently, very convenient for the conveyance of the ore. It affords a great quantity of iron, which one would not expect from its appearance to the eye; but analysis and experience have proved that it is valuable. It is necessary to calcine it before it is put into the smelting furnace."

The plant labeled "Ligusticum scotium" is a plant known as Scots lovage or Scottish licorice-root. It can be found near the coasts of northern Europe and north-eastern North America.

In the French editions of this book, these two illustrations are on different plates and pages.

Faujas-de-St.-Fond, cit. (Barthélemy). “Iron Stone and Ligusticum Scoticum.” In Travels in England, Scotland, and the Hebrides: Undertaken for the Purpose of Examining the State of the Arts, the Sciences, Natural History and Manners, in Great Britain, Vol. 1. London, England: James Ridgway, 1799. https://digital.sciencehistory.org/works/d728ogi.