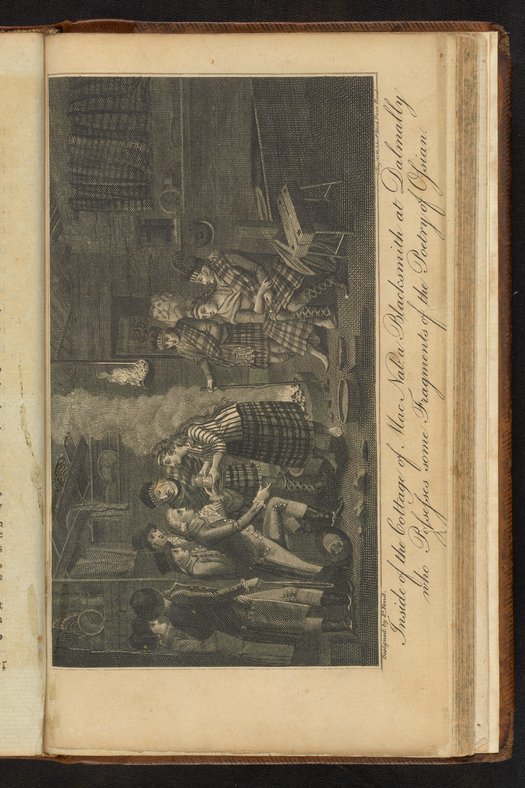 This plate depicts the workshop of Mac Nab, a man Faujas de-St.-Fond (1741-1819) came across in his travels across Scotland. It shows Mac Nab presenting de-St.-Fond and his fellow travelers with a "large buckler, of a round form, made of wood, overlaid with copper, and decorated in the centre with the representation of a rose, likewise of copper" (see page 292). It also shows Mac Nab's workspace and some of the treasures within it. The highlanders are depicted as dressed in kilts and other stereotypically Scottish clothing, while the French and Englishmen of de-St.-Fond's group dressed in clothes considered fashionable and high class at the time.

de-St.-Fond describes his experience with Mac Nab starting on page 290. He was led to him due to him having supposed possession of a rare manuscript, "containing several of the poems of Offian in the in the Celtic language." de-St.-Fond describes Mac Nab's home and its location in great detail throughout the chapter. He goes on to describe his interactions with Mac Nab and the great things he presented to him and his fellow travelers, including the pictured buckler, and "amour, which had been found a few years before in the ruins of an old castle in the neighborhood." (See page 292). de-St.-Fond also describes how he offered to buy several items from Mac Nab, to which Mac Nab refused on the grounds of the items belonging not to him, but to friends and his ancestors and that he would not part from them for any price. The rest of the chapter describes different aspects of Mac Nab's home and life and includes conversations had between de-St.-Fond and Mac Nab. de-St.-Fond uses Mac Nab as a case study of the life of a highlander. The chapter goes on until page 302.

Faujas-de-St.-Fond, cit. (Barthélemy). “Inside of the Cottage of Mac Nab, a Blacksmith at Dalmally Who Possesses Some Fragments of the Poetry of Ossian.” In Travels in England, Scotland, and the Hebrides: Undertaken for the Purpose of Examining the State of the Arts, the Sciences, Natural History and Manners, in Great Britain, Vol. 1. London, England: James Ridgway, 1799. https://digital.sciencehistory.org/works/d81gfyc.

Inside of the Cottage of Mac Nab, a Blacksmith at Dalmally Who Possesses Some Fragments of the Poetry of Ossian