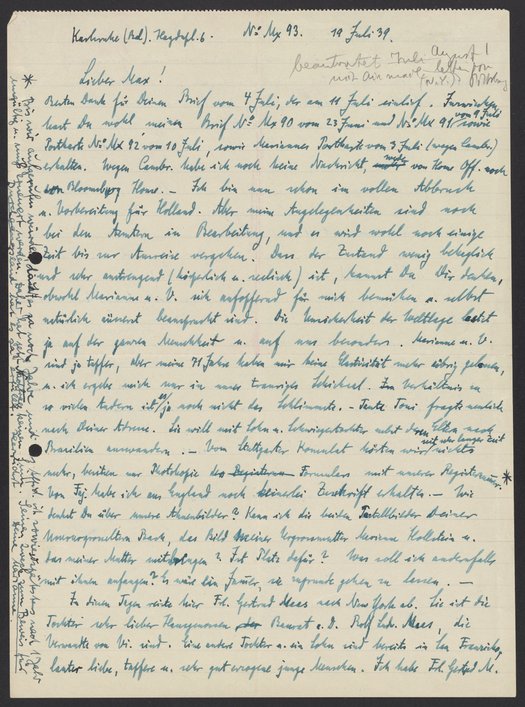 Georg Bredig (1868-1944) updates his son, Max Bredig (1902-1977), on his preparations to leave Germany for the United States via Holland in the late summer of 1939. He additionally discusses how other family members and neighbors in Germany are doing, while expressing dismay with the tumultuous political situation in Germany. World War II would begin on September 1, 1939, a mere six weeks after Georg's letter was sent to his son.

Thank you very much for your letter from July 4th, which arrived on July 11th. In the meantime, you have probably received my letter No. Mx 90 from June 23rd, letter No. Mx 21 from July 9th, and postcard No. Mx 92 from July 10th, as well as Marianne’s postcard from July 3rd (regarding Cambridge). I haven’t received any news yet from Cambridge, the Home Office, or Bloomsbury House. I am already preparing to move and depart for Holland. However, my affairs are still being dealt with by the officials. It will probably take some time until I can leave the country. You can imagine that this situation is not very comfortable and both physically and mentally strenuous. However, Marianne and Viktor are doing a lot for me and are under a lot of stress themselves. The uncertainty of the international situation weighs on the whole of humanity and on us in particular. Marianne and Viktor are brave, but my 71 years have left me no room for flexibility, and I must succumb to our sad fate. Compared to so many others, it’s not the worst. Aunt Toni asked for your address the other day. She wants to emigrate to Brazil with her son and daughter-in-law and her parents. We haven’t heard from the Stuttgart consulate in a very long time, although we have a photocopy of the form with our registration number*. I haven’t received any letters from Fajans in England yet. What do you think about our ancestral pictures? Can I bring the two pastel paintings of your great-great-great-grandparents Bach, the painting of my great-grandmother Marianne Hollstein, and the painting of my mother? Is there room for them? Otherwise, what should I do with them? It would be a shame to let them perish.

Ms. Gertrud Maas recently left for New York. She is the daughter of my dear neighbor, the government building officer Dr. Rolf Ludwig Maas. They are related to Viktor. Another daughter and a son are already in San Francisco. They are all sweet, courageous, and very considerate young people.

*It will take years until we are called up. Anyhow, the affidavit is invalid after 1 year and must be renewed. Therefore, it doesn’t make sense to inquire. It has fulfilled its purpose to prove residence in Germany. Best wishes, Marianne

I gave Ms. Gertud Maas your address and told her to give you our regards. We also ask that you and your acquaintances help this nice young girl in every way. Recently, Dr. Simon (letter dated June 30th) also wrote to me that you were with him one evening and that you look strong and well. Hopefully, it stays that way and Mrs. Liselotte will continue to feed you well! What about your move to a new apartment? That’s why I still write c/o Vanadium Corporation. I have terminated my lease for my apartment on October 1st. I must and hopefully can move out by then at the latest. The housing situation is now becoming difficult. Marianne and Viktor must leave their apartment on September 1st. Her wedding day was 2 years ago today! Aunt Ida and Werner’s lease has been terminated after December 1st. Aunt Vally wants to pack her furniture in Karlsruhe on June 25th.

Could Dr. Simon not advise Werner, especially since he is better acquainted with the status of physicians in the U.S.A? Werner has become hopeless and passive after many futile attempts to find a position. It would mean a lot to his mother, who has already been through so much, if Werner finally found something. The following colleagues already have the booklet with the list of my scientific publications: Karrer, Winterstein, and Ruzicka in Zurich, and Toda, Shirado, and Miyake in Japan. My friend in Utrecht will move at the beginning of August. However, letters would probably still reach him at the “van't Hoff Laboratory” of the local university.

Stay healthy and remain in good spirits! Say hello to all of our friends, especially Ms. Liselotte, and write regularly. Warm regards from all of us here. 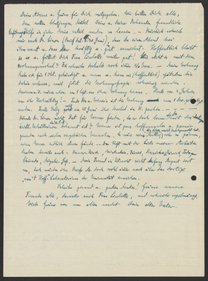