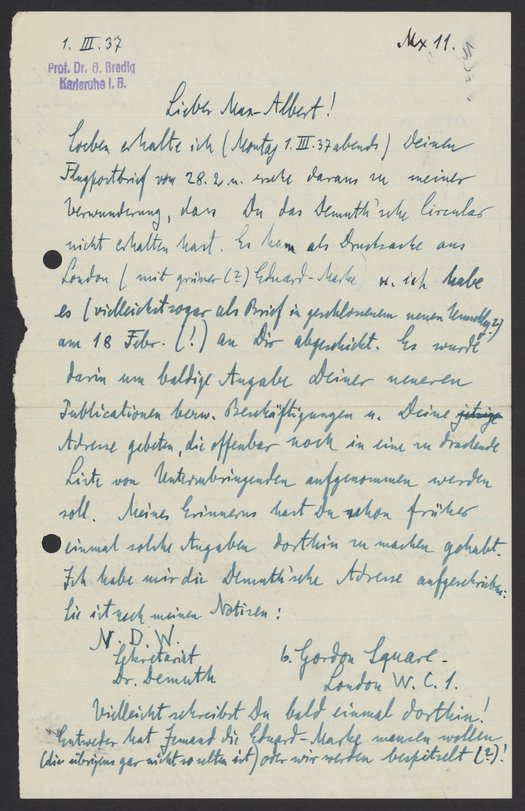 Georg Bredig (1868-1944) asks his son, Max Bredig (1902-1977), if he has received a newsletter from a Dr. Demuth for chemists. He suggests that Max update his employment, contact, and publications information with Dr. Demuth in London. Georg additionally reprehends Max for not writing more often, suggests that Max take better care of his health, and laments new discriminatory regulations for Jewish citizens regarding employment and emigration under the Third Reich.

I have just received (Monday, March 1, 1937, in the evening) your airmail letter dated February 28th. To my amazement, I see that you did not receive Demuth’s newsletter. It arrived as printed matter from London (with a green Edward stamp and I sent it to you, perhaps even as a letter in a new, sealed envelope on February 18tth.) It asks for more recent publications or employment and your address, which apparently will be included on a list of those to be accommodated. This list hasn’t been published yet. As far as I can remember, you had to provide such information to them before. I wrote down Demuth's address.

According to my notes, it is:

Maybe you should write there soon! Either someone wanted to measure the Edward stamp (which, by the way, is not that rare) or we are being spied on!

It would be even more important that you confirm the arrival of my shipments at once. The fact that you are so lazy that you don’t even regularly write me 3 lines (I might not ask for more) about your health etc. not only disturbs me because of your attitude towards me, but also because of your well-being. Contemplate if you are too stressed and for the sake of your health, adjust your lifestyle accordingly. Perhaps it has something to do with unreasonable time management, especially if you don’t sleep enough at night and don’t even have time to write 3 lines to your father. From now on, I will only write to you if you have written to me! Maybe this helps! With Marianne’s work permit, I fear many complications because of the new organization of this area by the German Labor Front. She might also have to pay the Reich Flight Tax if she emigrated, especially since the assets of ones’ father are presumably added to those of the emigrating children if they exceeded 20,000 Reichsmarks in 1931 and the child was part of his household.* It will now depend on whether she was deregistered here, when, and how!!

This hardship probably doesn’t apply to you, since you do not belong to my household, and you were also deregistered. However, Marianne would not have much left over if she emigrated, i.e., even less than you! Incidentally, the Reich Flight Tax Act is about to expire, but will in any case be further extended. Who knows how? I will soon have you bind the collection of my publications. On account of the handwritten dedications of the authors, which you may like, I returned some old offprints to you today with the laundry package. Mrs. Cotiaux sends her regards, as do the Go.’s, Anndel, and your old father.

*Dr. Ros. made me aware of this recently. He will presumably go to France with his wife and child. 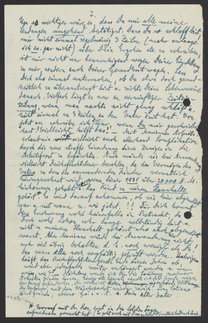