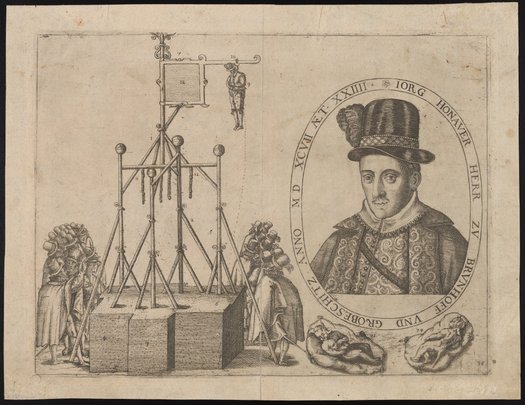 An etching depicting the execution of the alchemist, Georg Honauer (1572-1597) on the specially erected "Iron Gallows" in Stuttgart, April 2nd, 1597. The engraving shows a portrait of Honauer with inscription on the right side, including two small devils on pillows. On the left, the executed Honauer hangs on the gallows with a crowd of spectators gathered beneath.

Honauer was a goldsmith and alchemist. He entered the service of Duke Friedrich I of Württemberg in 1596, claiming that he could convert iron to gold. After the Duke went to considerable effort to bring the iron to Stuttgart from his armory in Mömppelgart for a transformation, Honauer panicked and fled. When Honauer was extradited back to Württemberg and was unable to transform the iron, the Duke ordered for Honauer to be executed in an unusually spectacular fashion. A gilded gallows was constructed on a stone foundation at the execution site of Wolframshalde. Built especially for Honauer, the gallows was made from 36 hundredweight iron (about two tons). This is the amount Honauer had promised to convert into gold. Honauer was brought to the scaffold in a garment covered entirely with gold tinsel and hanged.

The iron gallows was not dissassembled after the execution, instead it was used several other times. Most notably, on February 4, 1738, Joseph Süß Oppenheimer (1698-1738) was hanged in an iron cage on this gallows. 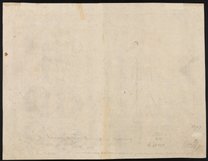 Execution of an Alchemist