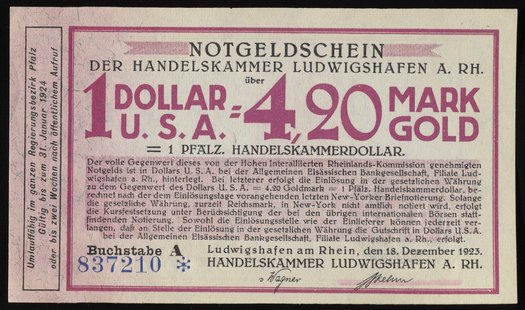 This one dollar/4.20 Goldmark emergency money bill was issued by the Ludwigshafen Chamber of Commerce after the German government created the Rentenmark to replace the old Reichsmark, which had become worthless due to hyperinflation. Cities and companies began issuing Goldmark paper money after the Rentenmark currency reform of October 15, 1923. Badische Anilin- & Soda-Fabrik and the city of Ludwigshafen issued notes in parallel with the same denominations. Ludwigshaven was the location of Badische Anilin- & Soda-Fabrik's main complex, which produced aniline dye. The recto of the bill includes the terms of the bill and an embossed seal with the verso featuring an illustration of a cathedral. The paper features a watermark design.