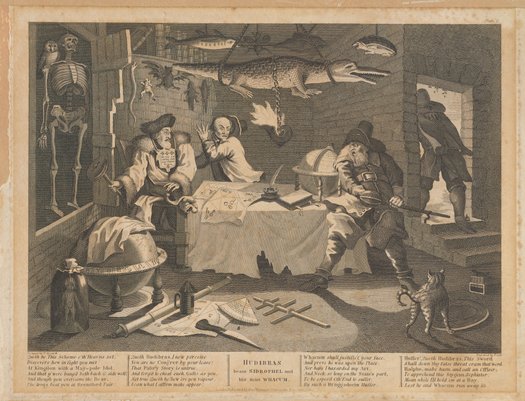 The scene, from an episode in Samuel Butler's mock-heroic epic, "Hudibras," shows the title character as he confronts the astrologer Sidrophel in a clandestine laboratory. Angry at the truths of his past which the astrologer has just revealed, Hudibras makes ready to draw his sword and attack. The scene is filled with details of the alchemical and occult works performed there: the astrologer's charts lie open across the table, joined by a globe, map, and tools of navigation and astronomical observation on the floor. At left, a small glass jar contains a miniature human figure—likely a homunculus, a form of 'artificial life' once considered possible. A stuffed crocodile, a swordfish, a turtle, and other creatures hang from the ceiling. To the upper left hangs a human skeleton with an owl on its shoulder, a reminder of the spectre of death.