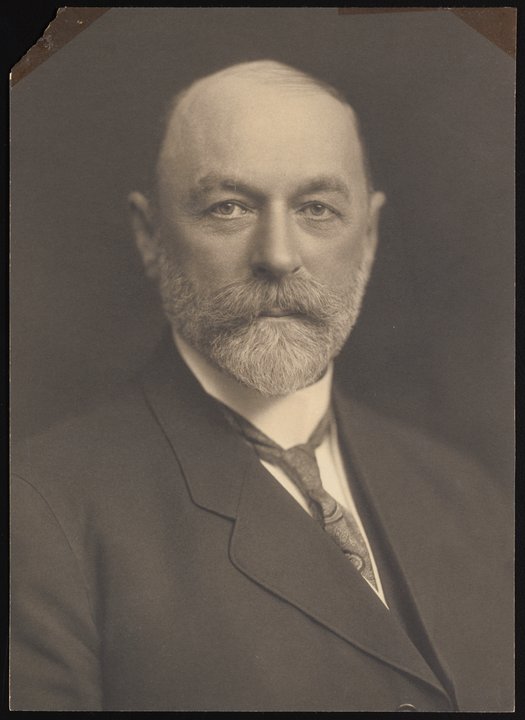 Portrait of Herman Frasch (1851-1914), a chemist and engineer best known for his work in the petroleum industry.

Herman Frasch was born on December 25, 1851 in Gaildorf, Germany. Frasch was schooled at the Gymnasium in Halle, Germany, but traveled to the United States in 1868 when he was only 17, where he became an assistant to Professor John M. Maisch at the Philadelphia College of Pharmacy. At the time, Pennsylvania was experiencing a petroleum and industrial boom following the Civil War, and Frasch began to investigate the complex mixture of hydrocarbons found in petroleum. In 1877, Frasch patented an improved process for refining paraffin wax, which was used for candles, electrical insulation, and in drywall for home-building. After securing his patent, Frasch relocated to Cleveland, where he developed a reputation as a chemical consultant. During this time, Frasch developed and patented an improvement in refining Canadian crude oil, which had a high sulfur content that caused the oil to smell terrible and produced refined kerosene that burned poorly. In 1886, Frasch’s work making oil more marketable caught the attention of the Standard Oil Company and, on the request of John D. Rockefeller, he returned to Cleveland to work for Standard Oil.

Once at Standard Oil, Frasch established the first experimental research program ever undertaken by the American petroleum industry, specifically devoted to reducing the high sulfur content of Lima petroleum. Working at the Solar Refinery in Lima, Frasch developed a method to remove sulfur by creating a reaction between a metallic oxide and sulfur; this reaction formed a sulfide, which could then be precipitated. This development, which made Lima crude more appealing and caused it to burn more cleanly, shot Lima crude oil’s prices from fourteen cents per barrel to one dollar per barrel.

Frasch subsequently devoted the remainder of his career to researching the production of sulfur, which yields sulfuric acid, a key manufacturing ingredient for petroleum. Working in Louisiana, Frasch determined that sulfur could not be mined profitably with a pick and shovel and ultimately devised a method of hot-water mining, in which sulfur was melted underground and pumped to the surface in molten form.