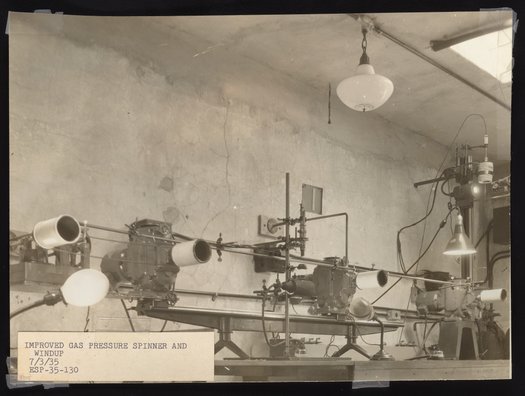 General view of an improved gas pressure spinner and windup used during the early stages of nylon production and research at the DuPont Experimental Station in Wilmington, Delaware. In this iteration, a spinning machine containing nylon chips (right) was elevated approximately six feet above the bobbin onto which the resulting nylon filament was to be wound. Additional bobbins, which were used to draw out, or stretch, the filament are situated at varying distances from the spinning machine. This arrangement was designed to allow for greater control over the filament's thickness, or denier, and while the experiment did not succeed, researchers did conclude that spinning and drawing were best performed as separate operations.