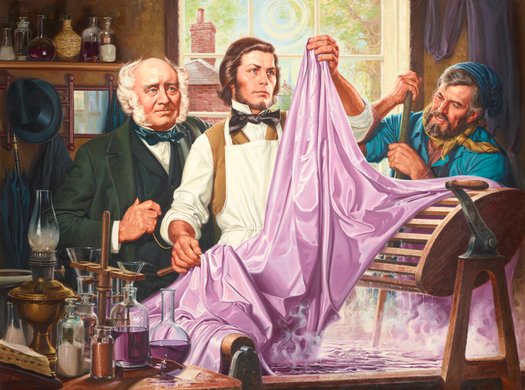 William Henry Perkin depicted in his laboratory. Perkin, center, examines test dyeing of silk taffeta with mauve aniline dye. Left, his father, the backer of the plant, stands behind Perkin and admires the fabric. In the foreground, on the table is a small bottle of bronze crystals, which produce mauve dye when dissolved in very hot water. Also on the table, dye jigs used at the time for dyeing small amounts of fabric.

Laboratory is the application laboratory at Perkin plant in Greenford, England, northwest of London. Through the window is one of the plant's outbuildings, maybe the chemical laboratory. Artist based his depiction of the buildings on the one surviving exterior drawing of the plant, and a 1957 photograph taken before the last of the plant buildings was torn down. The large window was unique for a plant at that time.

Perkin discovered the first aniline dye, mauve, in 1856 at age 18. It was the first commercially available mass-produced dye. His discovery was significant as one of the first important links between pure chemistry and industry. Perkin was called "the world's first chemical technologist" and "father of the synthetic chemical industry."