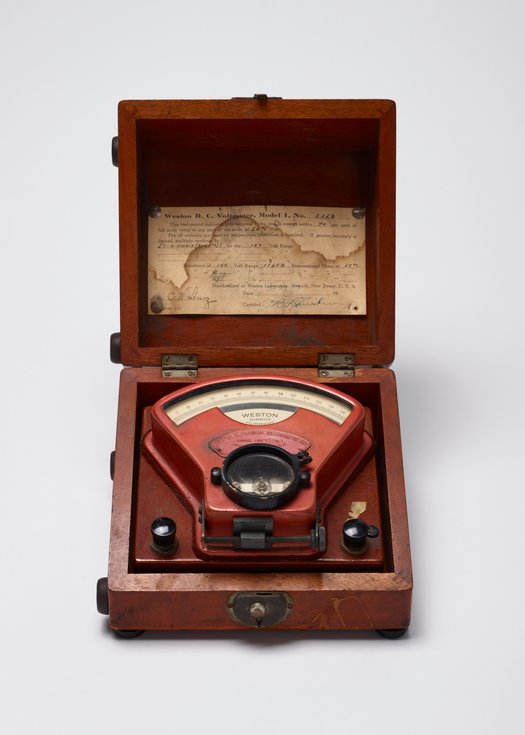 Direct current voltmeter, Model 1. Instrument mounted on brown felt on a hardwood base, with a brass tag in front; instrument made of metal and finished in orange-brown; two electrical connections covered in black plastic, screw-on caps; on the face of the instrument is a plastic-covered scale, a metal tag, and a plastic window framed in black metal.

Hardwood case for the voltmeter; brown leather handle with metal brackets; black plastic tag next to the handle; metal hinges and clasp; eight black rubber feet along the left side and bottom; inside the lid is a paper certificate explaining the product specifications.

A voltmeter measures the difference in voltage between two points in an electrical circuit. It was first developed in the early 1880s, when the growth of electric lighting demanded such an instrument. The demand for voltmeters rose dramatically in the late 19th century, and the market for these devices was highly competitive.

Edward Weston developed his Model 1 voltmeter in 1888, and it became the first product of the Weston Electrical Instrument Company. The Model 1 became the standard bearer in electrical meters, as did another of Weston's inventions, the standard cell.