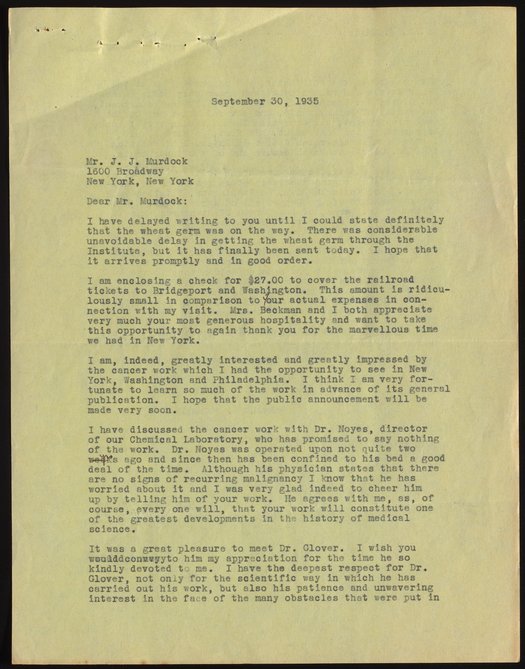 The letter discusses shipment of wheat germ, expenses; demonstrations of the acidimeter at the Pennsylvania General Hospital, University of Pennsylvania, the Department of Agriculture, and the Bureau of Standards; acidimeter orders through Braun, Fisher, and Sargent, and a meeting with a representative of the Arthur H. Thomas Company; and Beckman's meetings with Drs. Glover, Clark, Weatherwax, and Acree. Of particular note is the reference to Arthur Noyes, whose medical condition is discussed briefly in this letter, and Beckman's favorable impression of cancer research in New York, Washington, and Philadelphia.

Arthur A. Noyes (1866-1936) was a physical chemist, educated in Germany and at MIT, where he later taught. He was dedicated to basic research; at MIT, he founded and partially funded the Research Laboratory of Physical Chemistry, which produced many influential chemists. Noyes was instrumental in the foundation of the National Research Council during World War I. In 1919, he moved to Caltech, where he formed a “triumvirate” with fellow NRC leaders George Hale and Robert Millikin. 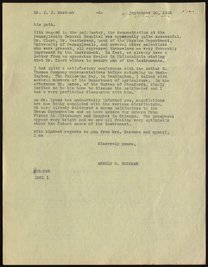