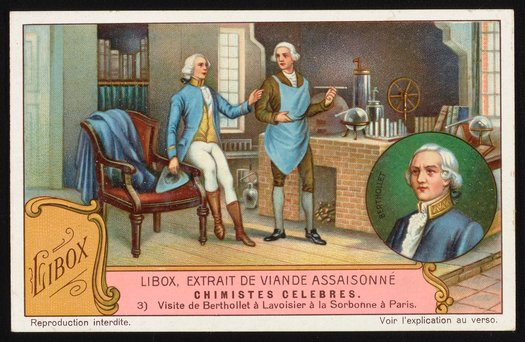 Illustrated trade card depicts chemist Claude Louis Berthollet (1748-1822) visiting Antoine Laurent Lavoisier (1743-1794) while Lavoisier was working in a lab at the Université de Paris or Sorbonne University. They stand in front of a table containing scientific instruments. Also includes an inset bust of Berthollet. Verso is an advertisement for Libox's Seasoned Beef Extract along with a biography of Lavoisier and Berthollet.

Widely considered the father of modern chemistry, Lavoisier is credited with many scientific discoveries including recognizing and naming oxygen and hydrogen. Berthollet was also a leading French chemist, second only to Lavoisier. Berthollet and Lavoisier collaborated on the reorganization of chemical nomenclature and corresponded on scientific findings.