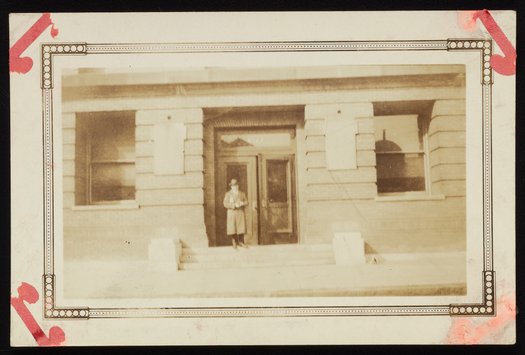 General view of Dr. Michael Somogyi (1883-1971) posed in front of a building on the Washington University Medical School campus. A Hungarian American professor of biochemistry at the Washington University and Jewish Hospital of St. Louis, Dr. Somogyi is best known for his preparation of the first insulin treatment given to a child with diabetes in the United States in October 1922.

Dr. Michael Somogyi was born in Austria-Hungary in 1883 and earned a degree in chemical engineering from the University of Budapest in 1905. After immigrating to the United States, Somogyi worked as a Biochemistry Assistant at Cornell University Medical College from 1906 to 1908 before returning to Budapest to become chief chemist of the Municipal Laboratory. Somogyi earned his Ph.D. from the University of Budapest in 1914 and subsequently returned to the United States in 1922 as an instructor in biochemistry at Washington University in St. Louis. At Washington, Somogyi’s work with Drs. Phillip A. Shaffer and Edward Adelbert Doisy on the development of a new method for preparing insulin of a sufficient quantity and quality viable for the treatment of diabetes inspired a life-long interest in the disease. In 1926, Somogyi became the first biochemist appointed to the staff of the newly-opened Jewish Hospital of St. Louis and remained there as director of the clinical laboratory until his retirement in 1957. Dr. Somogyi died in 1971 in St. Louis at age 88.