This collection, digitized here in its entirety, consists of twenty-four illustrated color postcards advertising the products and services of the Eastman Organic Chemicals Department (Division of the Eastman Kodak Company). Dating from the 1950s and 1960s, the postcards feature cartoon depictions of humorous laboratory scenes captioned with such taglines as “It’s better to get it from Eastman,” "Maybe Eastman has a better method," and "Have You Tried Eastman?" Each postcard is postmarked from Rochester, NY and includes a brief summary of Eastman’s available stock of chemical compounds as they pertain to the “chemical businessman.” The advertisements were collected by John C. Sheehan during his tenure at the E.R. Squibb Research and Development Laboratories in New Brunswick, NJ and serve as an engaging visual record of mid-century advertising from a significant American company. 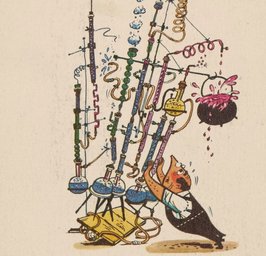 Search within the John C. Sheehan Collection of Chemical Advertisements