This collection contains an incomplete assortment of records related to the Nuclear Division of the Lawrence Berkeley National Laboratory under the Directorship of Glenn T. Seaborg and later Darleane C. Hoffman. The Seaborg material is primarily memorabilia and photographs, including awards, diplomas, and numerous images of Seaborg with celebrities and sitting U.S. Presidents. The Hoffman series deals primarily with the 1989 "Cold Fusion" controversy and Hoffman's role in discrediting the discovery. It also contains material related to claims by both the USSR and the U.S. on the discovery and naming rights of elements 97-106. There are approximately four linear feet of manuscript records along with numerous oversized and photographic material. A portion of the oversized memorabilia from Glenn Seaborg has been digitized and is available online. 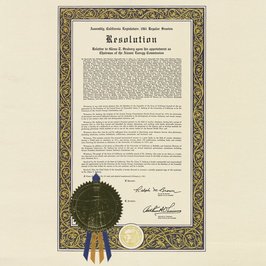