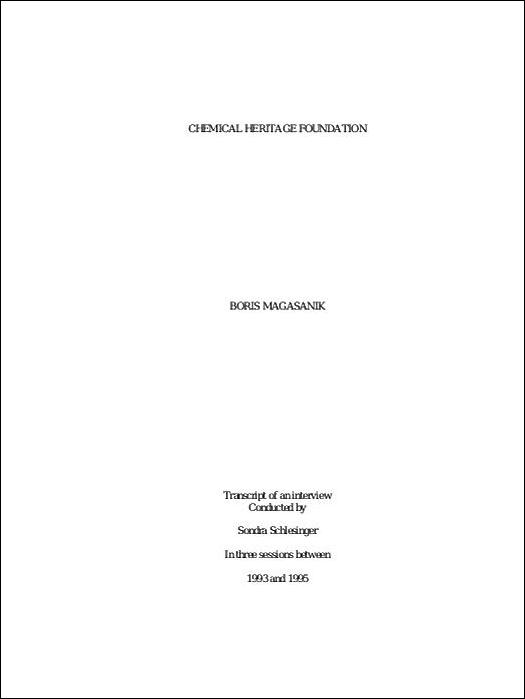 Boris Magasanik begins the interview with a description of his childhood years in Vienna, Austria. Shortly after graduating from the Gymnasium in 1937, Magasanik immigrated to the United States to live with his sister in New York City. It was still possible for Jewish families to leave Austria, and both Magasanik and his parents left the country. He enrolled in City College of New York, where he earned a B.S. in biochemistry in 1941. Hearing of its good reputation for organic chemistry, Magasanik decided to attend graduate school at Pennsylvania State University. While at Penn State, Magasanik was drafted into the U.S. Army to serve in the Second General Hospital. His unit was transferred to Oxford, England, where he remained until the spring of 1944. After his release from military service in 1945, Magasanik went back to New York and continued his graduate education at Columbia University, researching inositols and RNA with Erwin Chargaff.

After his postdoctoral work, Magasanik went to Harvard University as the Ernst Fellow in 1949. After joining the faculty at Harvard, Magasanik and his students researched histidine and purine biosynthesis and inositol degradation. When he joined the faculty of Massachusetts Institute of Technology [MIT] in 1960, Magasanik continued his work on inositol degradation, studying enzyme pathways. Later, Magasanik researched histidine degradation in Salmonella and Klebsiella. In 1967, Magasanik became head of the Department of Biology at MIT, serving in that capacity for ten years. During his years as chairman, Magasanik helped found the Center for Cancer Research. After his chairmanship, he remained active in the department, helping to establish the Whitehead Institute. Magasanik concludes the interview with a discussion of MIT's teaching environment, financial support for research projects, and continuing as an educator after retirement.