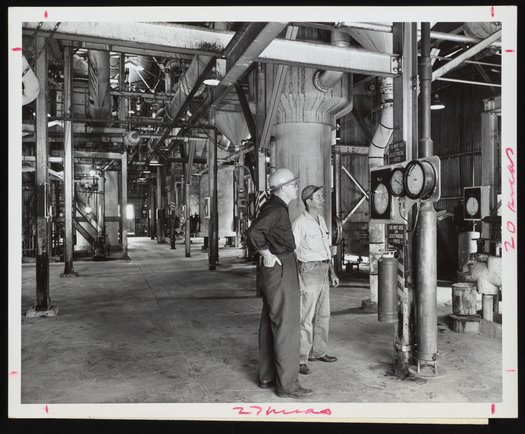 General view of Stan Fenelon (left), Pexite rosin and refinery supervisor, and Clarence Darley (right), day relief operator, examining the rosin solution evaporator apparatus at the Hercules Powder Company plant in Brunswick, Georgia. One of two Hercules plants specializing in naval stores, the Brunswick plant extracted rosin, turpentine, and pine oil from pine tree stumps in order to produce a range of chemicals used in the manufacture of varnishes, paints, adhesives, insecticides, textiles, and other industrial products. Per notations accompanying the photograph, the evaporator and other refinery apparatus were used to separate solvent and liquid naval stores products from crude rosin and to fractionate the solvent from the oils during the manufacturing process.