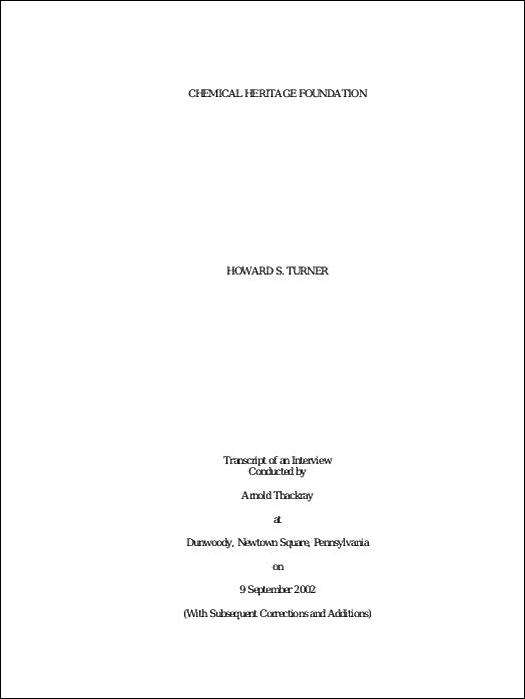 Howard S. Turner begins the interview with a discussion of his childhood and his early interest in chemistry. After attending the George School for two years, he attended Swarthmore College and received a bachelor's in chemistry. Shortly after graduating from Swarthmore in 1933, Turner was accepted as a Ph.D. candidate at Massachusetts Institute of Technology [MIT]. In 1936, Turner received his Ph.D. in chemistry with a minor in chemical engineering from MIT.

Turner started his career with E. I. DuPont de Nemours and Company working in the Experimental Station in Wilmington, Delaware. While at DuPont, Turner researched new uses for polymer 66 and nylon, in addition to developing and testing Corfam. In 1947, after eleven years with DuPont, Turner left the company to become the director of research and development for the Pittsburgh Consolidated Coal Company. In 1954, Turner left Pittsburgh Consolidated to become the vice president of research and development for Jones & Laughlin Steel Company [J&L]. At J&L, Turner reorganized and focused the company's research and development program. In 1965, Turner left J&L to become president of Turner Construction Company, in New York. The company, started in 1902 by his uncle, was among the top construction firms in the country. Turner became chairman of the board in 1971, and remained so until his retirement in 1978. Turner concludes the interview by describing his affiliations with other companies and a short reflection on his career.