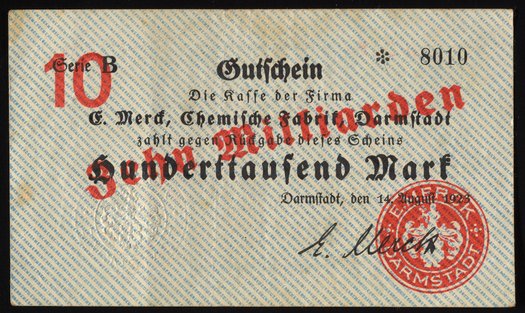 This Zehn Milliarden/Hunderttausend Mark Gutschein, or ten billion/one hundred thousand Mark voucher, was issued by E. Merck. Zehn Milliarden was printed over the original Hunderttausend Mark voucher due to rampant hyperinflation. The recto of the company scrip includes the company seal with the verso featuring the E. Merck logo depicting a flame beneath a vessel. Paper features a watermark design.

E. Merck is the world's largest operating chemical and pharmaceutical company with its roots dating back to the seventeenth century in Germany.