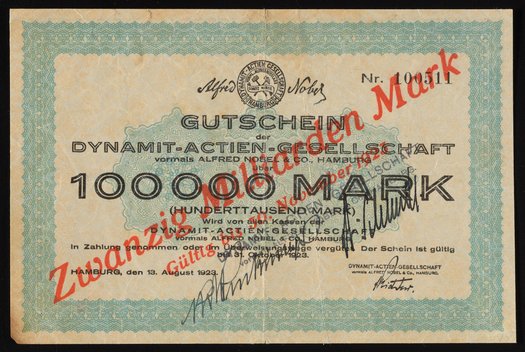 This Zwanzig Milliarden/Hunderttausend Mark Gutschein, or twenty billion/one hundred thousand Mark voucher, was issued by Dynamit-Aktien Gesellschaft. Zwanzig Milliarden was printed over the original Hunderttausend Mark voucher due to rampant hyperinflation. Styled after a banknote, the frontside of the company scrip includes the company logo and facsimile signature of the company's founder Alfred Bernhard Nobel (1833-1896). Paper features a watermark design.

Dynamit-Aktien Gesellschaft produced dynamite by mixing nitroglcerine with diatomaceous earth, which was a patent they tightly controlled due to competition.