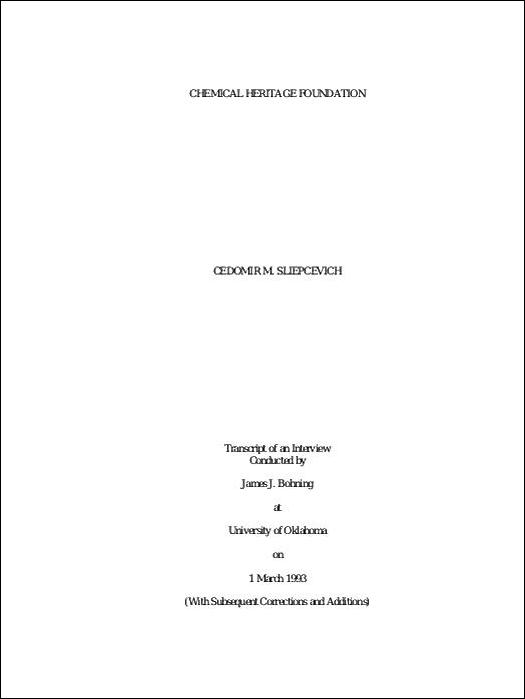 Cedomir Sliepcevich begins the interview with a description of his family and early years in Anaconda, Montana. A firm educational beginning in Anaconda influenced Sliepcevich to attend college. He enrolled in the chemical engineering program at Montana State College in 1937. During his sophomore year, Sliepcevich knew he wanted to go on to graduate school. In 1939, he transferred to the University of Michigan and received his B.S., M.S. and Ph.D. in chemical engineering there. While a graduate student, Sliepcevich studied thermodynamics under George Granger Brown. During the summer of 1942, he worked with Fred Kurata on a National Defense Research Council classified project on screening smokes. While earning his Ph.D., Sliepcevich was an instructor at the University, where he taught thermodynamics. After receiving his Ph.D. in 1947, he also worked as a consultant for the U.S. Army V-2 rocket test program.

In addition to his career in academia, Sliepcevich continued to do consulting work for various companies, including Monsanto Chemical Company, Constock Liquid Methane Corporation, and Autoclave Engineers, Inc. In 1955, he joined the faculty of the University of Oklahoma as Professor and Chairman of Chemical Engineering. Sliepcevich was instrumental in redeveloping the University's doctoral program and engineering curricula, and established the Flame Dynamics Laboratory there. He founded his own firm, University Engineers, Inc., in 1963, which specialized in fire protection systems for liquid natural gas. He officially retired from teaching in 1991 and continued to work as a consultant on many research projects. Sliepcevich concludes the interview with reflections on his career.