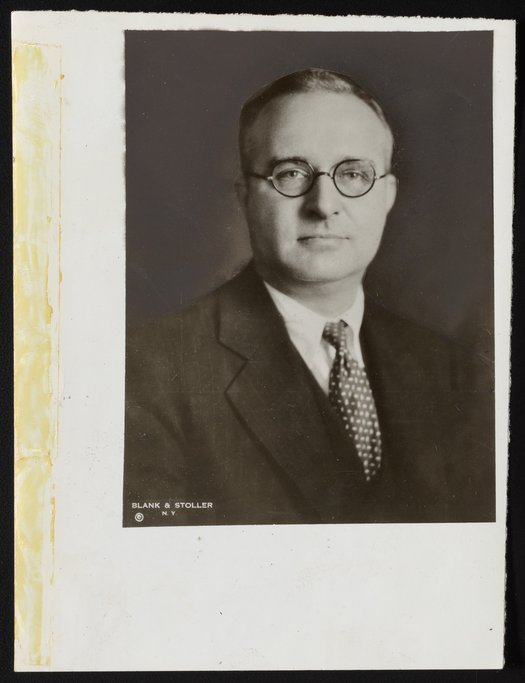 Portrait of Thomas Midgley, Jr. (1889-1944), an American engineer and chemist who discovered the effectiveness of tetraethyl lead as an antiknock additive for gasoline.

Thomas Midgley, Jr. was born on May 18, 1889 in Beaver Falls, Pennsylvania and grew up in Columbus, Ohio. He attended Cornell University, where he received a Master's of Engineering in 1908 and a PhD in mechanical engineering in 1911. After graduating from Cornell, Midgley went to work for Dr. Charles F. Kettering at the Dayton Engineering Lab (DELCo) in Ohio, where he was assigned to research why kerosene-fueled engines developed a knocking sound. Midgley subsequently identified ethyl iodide as an antiknock agent and, based on this research, became a pioneer in the study of internal combustion. In 1930, Midgley also researched safer alternatives to common refrigerant chemicals including ammonia, methyl chloride, and sulfur dioxide and ultimately identified dichlorodifluoromethane, or Freon-12, as an odour-free, nontoxic, and nonflammable refrigerant gas that could be used in residential refrigerators and air conditioners. Over the course of his career, Midgley was presented with several awards, including the Nichols Medal (1923), the Longstreth Medal (1925), the Perkin Medal (1937), the Priestley Medal (1941), and the Willard Gibbs Medal (1942), as well as elected president of the American Chemical Society and named as an American delegate to the International Congress of Applied Chemistry. Thomas Midgley, Jr. died on November 2, 1944 in Worthington, Ohio.