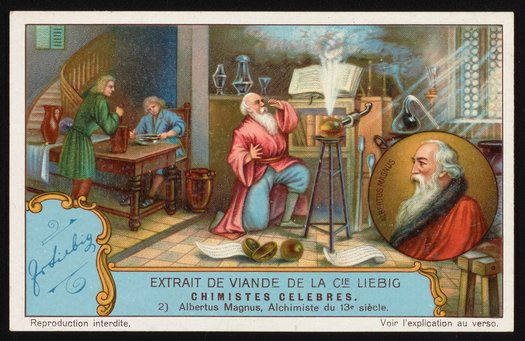 Illustrated trade card depicts alchemist Albertus Magnus (1193?-1280) working in a lab with a vessel releasing steam. Also includes an inset bust of Magnus. Verso is an advertisement for Liebig's Extract of Meat along with a biography of Magnus.

Albertus Magnus (1193?-1280), also known as Saint Albert the Great and Albert of Cologne, was a German Dominican friar and Catholic bishop. His work in alchemy and chemistry credits him with the discovery of arsenic. He also experimented with photosensitive materials including silver nitrate. His publications cover various topics in alchemy and chemistry. He is often attributed with discovering the philosopher's stone but he did not publish on this subject so no record exists of this discovery.