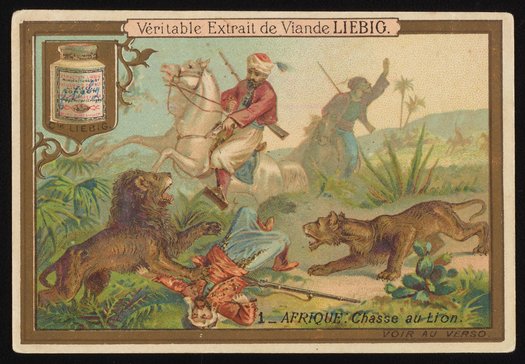 Entitled "Afrique. Chasse au Lion," illustrated trade card depicts hunters chasing a lion in the African wilderness. A hunter on horseback wears a turban and aims a gun at a lion that is standing upon another hunter. The imagery could be referencing European adventurer Sir Henry Morton Stanley's 1871 visit to Africa, who mentioned bringing the extract on his journey. The upper left hand corner depicts a jar of Real Liebig Meat Extract. Verso is an advertisement for Liebig's Extract of Meat.