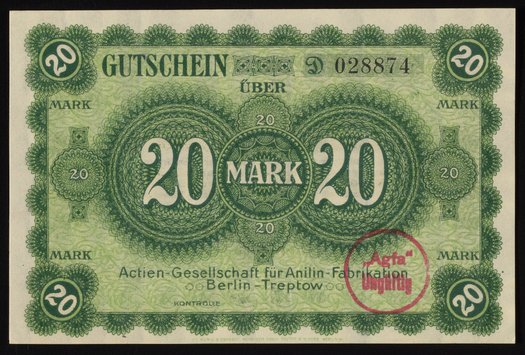 In the amount of twenty Mark, this Gutschein, or voucher, was issued by Aktiengesellschaft für Anilinfabrikation for their manufacturing facility in Berlin-Treptow. This particular company scrip is styled after a banknote with the terms of the scrip on the verso. The recto contains an "Ungültig" cancellation stamp meaning it was no longer valid due to a purchase made within the company store or canteen. Paper features a watermark design.

Aktiengesellschaft für Anilinfabrikation, commonly known as Agfa, was manufacturing X-ray plates and photographic film products in the early twentieth century. Berlin-Treptow, Germany was the location of an aniline manufacturing plant.